Gamepedia and Fandom have joined forces, and so have our two wikis on Idle Champions! Our combined teams would like to encourage all Idle Champions fans to work together. If you'd like to help move content from the archived Fandom wiki here to the active wiki, head to the Community Portal to coordinate efforts with the other editors.

Idle Champions of the Forgotten Realms Wiki
Register
Don't have an account?
Sign In
Advertisement
in: Stubs, Game Mechanics

Edit
This article is a stub. You can help Idle Champions of the Forgotten Realms Wiki by expanding it. 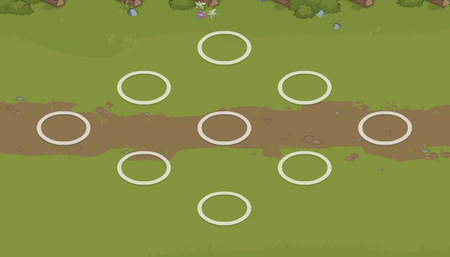 Formation Strategy is one of the Game Mechanics in Idle Champions of the Forgotten Realms.

Note: This page is severely outdated and most of these formations aren't possible anymore.

Mastering the position of each Champion to maximize their special abilities is the key to completing each adventure. Each Champion's abilities and gear requires careful thought to create the best combination. Only the most powerful formations will defeat the waves of Dungeons & Dragons monsters.

(Author of this section only has base heroes and Wintershield heroes. Edits to improve formations are appreciated.)

Artemis is rewarded from Wintershield Year 3 and is easily one of the highest DPS heroes due to his level 100 ability Observance. Once you have a flute, Artemis will get a larger buff from observing than from being the one buffed by it; and observance stacks multiplicatively with itself allowing buffs to be applied at many times normal strength.

As noted above we are working with just the 12 base heroes and the Wintershield heroes. The final formation from the first nine slots is as follows. When working toward this configuration move characters around to maximize the outgoing buffs to DPS heroes. Artemis is not only going to be the major source of DPS in this configuration, he will also be tanking thanks to outrageous Mass Cure Wounds and Song of Protection applications. Delina is in a bad spot, but we need the far back spot for Makos so that only two heroes are adjacent for Dark Blessing. Before you get Dark Blessing reverse their positions.

Artemis will eventually be taking more damage than he can tank because he will be being overwhelmed before you want to reset. By this point we should be able to afford Tyril and leveling him to 45 for Wildshape.

A few reasons, basically I think that Bruenor has one of the best buffs for the cheapest cost (although I have the Many-notched Axe Gear on him which increases his dmg by 700% so this might play into your setup), and putting him on the same row as Minsc is probably the best level 75+ damage, since he does area attack. Jamilah is also one of the best DPS for cost (double hit to clear enemies), so these 3 are my hardest hitters and the majority DPS for the team, and I usually use the others as buffs/tanks to them. I use Celeste for damage and heal buffs, Calliope for the buffs in front (although it sucks that she can't Song Of Protection 2 rows to the front). Nayeli for the massive buffs to the Champions behind her, and although she has one of the best tanking skills, I find her dps buff is better for my casual play. Arkhan has the buff that he needs to be in front with 2 Champions behind, but suit yourself. Asharra does meh damage, but has the human bond which buffs 2/3 of the dps middle column. Tyril for Moonbeam heals and all dps.

There is a synergy in this formation that far surpasses any other formation here, it is stable, rock solid dps that doesn't demand the front line getting mobbed before it does any reasonable dps. Ok, here it is:

Now, Lets talk about it.

Arkhan. He is in the front because he has a ton of hp, he gets a buff later for having champs behind him and for him being in the front. ok.

Celeste and Nayeli. Celeste heals Arkhan and buffs our two major DPS in the bottom middle. Nayeli provides the buff for the entire middle column, lets move on.

Bruenor at the top to provide the buff for the major two dps in this column. moving on.

Minsc in the middle. He buffs the party, and he swings AOE, so once he's leveled, he does crazy dps.

Jamilah at the bottom because for the time being, she does the highest singular dps and I so happen to have a sword for her that increases the damage of all champs by 120%. (at lvl 40, Jamilah should swap her location with Minsc due to her ability)

Tyril in back. Tyril provides a 112% dmg increase to the party.

This current formation affords me 33.1n dps, sitting at lvl 102 comfortably. will be back in a week or month for report after spending earned income.

All Hail Birdsong - The Goddess of Song:[]

Arnatuil's guide to Strix as a hero.[]

Okay so I prefer Strix over Jamilah, because A) I have good gear for Strix, and B) I just like the way her attack animation looks. Oh and yeah thus it does more dps. This includes 2,95e26 gold and Champion gear, which isnt maxed at all.

From outside formation to 2,86e23 in formation something like 3e46 (playing The Contagious Curse so not absolutely sure) Note that Strix's dps increases when enemies enter within "melee" range, and even further if you chose Panic and they have attacked an ally. Thus killing Ranged enemies is slightly more difficult than melee.

Nayeli provides the most important buff by taking damage(about 2000% over), so she must be placed on frontline alone.

Although selecting champions depends on their Gear, in general Asharra, Makos and Hitch are good buff champions.

Minsc has area-attack type. He could be best dps choice for earning gold. But if you want to beat the boss, Asharra, Makos, Jamilah and Arkhan would be better than Minsc, because of Hitch's buff skill depending on character's Cha point.

Level up Minsc, he does ridiculous AoE damage.

Strix has AOE like Minsc, and does ridiculous damage. Everyone else is buffing her. Placement is ready set for the Tier 4 Blessings that will speed up Barrowin (and hopefully add that third hammer) and buff Strix even further.

Ishi and Bruenor are the only additions/changes, the rest of them remain the same. I usually pick Wait For It and Friend To Shorties, but Clear Em Out is good for quick runs (gem farm or High Roller dice) With Ishi. Bruenor is Battle Master. I would rather use Deekin but placement for use with the Blessings prevents it. I'm experimenting with a long run and will update with stats.