Gamepedia and Fandom have joined forces, and so have our two wikis on Idle Champions! Our combined teams would like to encourage all Idle Champions fans to work together. If you'd like to help move content from the archived Fandom wiki here to the active wiki, head to the Community Portal to coordinate efforts with the other editors.

Idle Champions of the Forgotten Realms Wiki
Register
Don't have an account?
Sign In
Advertisement
in: Chests 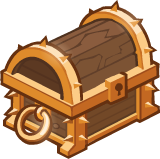 Chest contains Items and Gear of different rarities depending on chest type. It is possible to find shiny gear which increases the effect of this gear by 50%.

Each Event has its own kind of chest which works on the same way as the regular silver and gold chest with one exception. The dropped Gear belongs to the Event related Champion.

Which chests to buy?
Usually a personal preference, honestly. But having a chance to get one or two very, very powerful items in a Gold Chest seem much better than getting ten mediocre ones. However the math could be different to see which is better in the long run.

All event champion chests are also available from their respective Time Gates in a limited amount.